With winter upon us, Ukraine’s fight against tyranny looks a lot like ours did 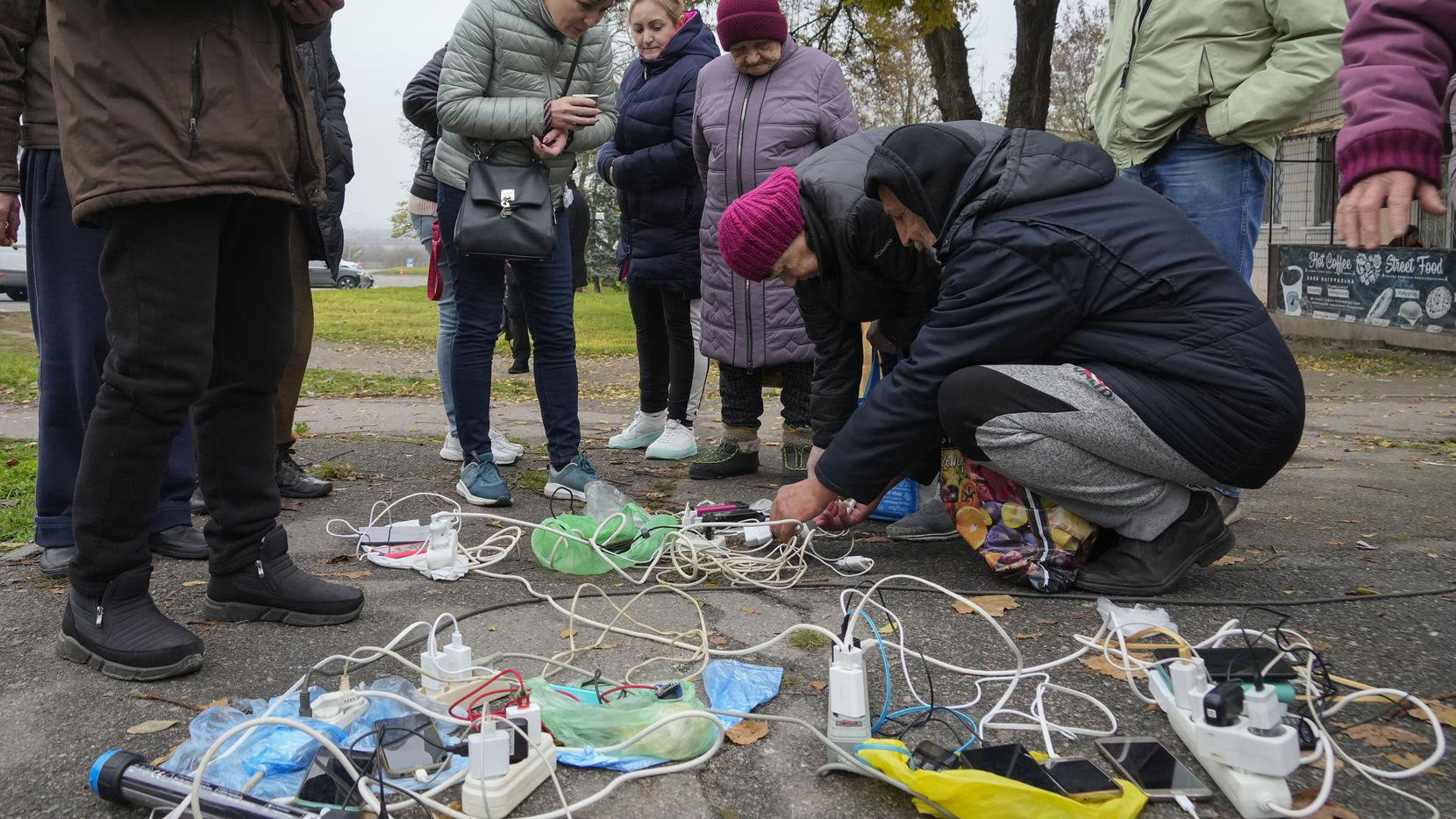 People charge their phones, try to connect to the internet and make phone calls on central square in Kherson, Ukraine, Thursday, Nov. 17, 2022. Russian airstrikes targeted Ukraine’s energy facilities again Thursday as the first snow of the season fell in Kyiv, a harbinger of the hardship to come if Moscow’s missiles continue to take out power and gas plants as winter descends.(Efrem Lukatsky / ASSOCIATED PRESS)

A military behemoth attacks a fledgling nation. It dismisses the rebels as little more than a rebellious colony, but patriots rush to their homeland’s defense.

Then they shock the world by winning a key battle against their seemingly invincible foe. Other nations are encouraged and step in to help. But that’s when a frigid winter storm sweeps in and threatens to break their will.

Sounds like the war in Ukraine, right? It’s not. It’s actually the story of America’s own fight for freedom from Britain, the preeminent naval superpower of its day.

The parallels between the battle for American independence and the fight for freedom in Ukraine are remarkable.

When the Continental Army defeated the British at the Battle of Saratoga in October of 1777, it was the equivalent of Russia’s retreat from Kyiv.

Was it possible? Could the insurrectionists actually break free of the grip of this geopolitical colossus?

Often underappreciated is the vital role other nations played in America’s struggle for liberty. After Saratoga, the French, Spanish, and Dutch all joined the U.S. war effort against Britain, providing critical support.

The ultimate test: The brutal winter at Valley Forge, with freezing temperatures and wind-driven snow. Disease claimed some 2,000 soldiers’ lives, and the stories of the bloody footprints that poorly provisioned Continental soldiers left in the snow are not a myth.

The image of Gen. Washington kneeling to pray in the snow at Valley Forge may be apocryphal. But without the aid of providence and allies abroad, it was hard to envision how the nascent young nation could ever recover. Indeed, just a few years later, France would provide Washington’s army with so much winter clothing for the troops that Washington had to find new warehouses just to store the excess.

Today, the frontlines in the battle of good vs. evil are no longer found in Concorde and Yorktown. They’re in Kyiv, Odessa, Kharkiv, and Kherson. Following brutal Russian missile and drone attacks that have damaged or destroyed roughly half of Ukraine’s power grid, many regions of the country are subject to daily, rolling blackouts. This leaves them with only a few hours of electrical power for heat and light each day.

Russia’s constant artillery and kamikaze drone attacks have damaged or destroyed over 800,000 dwellings nationwide. Those residents who didn’t flee to eastern Europe – including elderly, nursing moms, and children – now find themselves shivering in the dark without heat or light. Other vital services including sewage and water are interrupted as well.

With temperatures already dipping into the 20s and a long dark winter ahead, a vast humanitarian crisis looms in Ukraine. On Sundays, Ukrainians trudge through snow to their churches, only to stand shivering in the dark to worship without lights, heat, or power.

It’s all part of Vladimir Putin’s plot to break the will of Ukrainians, putting their lives on the line for freedom just as the American colonists did over 200 years ago. Ukraine’s leaders are reportedly preparing to evacuate up to 3 million people. That’s in addition to the 7.8 million Ukrainian refugees who have already fled elsewhere in Europe.

Now is the time for all Americans to come to the aid of their brothers and sisters in Ukraine. Evil left unchecked is a threat to liberty everywhere: We are all Ukrainians now.

At CityServe International, we’ve already had the privilege of working with a vast church network throughout Ukraine and Eastern Europe that is equipped with a fleet of vans and trucks that can get help where it’s needed most. We’ve been fortunate to provide over 1 million meals to beleaguered Ukrainians in March via this same church network. And with God’s favor, and the continued generosity of Americans this holiday season, more meals will be on the way.

As the worst of winter looms, we’re also launching a new “Generators for Ukraine” campaign, and frankly, we need all the help we can get. The goal is to provide Ukraine churches with fuel and generators so residents can count on having a warm, well-lit refuge where they’re able to gather. Just the other day Ukrainians gathered in the dark for Sunday services due to a power outage, and yet they remained and continued their worship. The country’s churches have emerged as a major source of hope and support for Ukrainians determined to fight for their freedom. 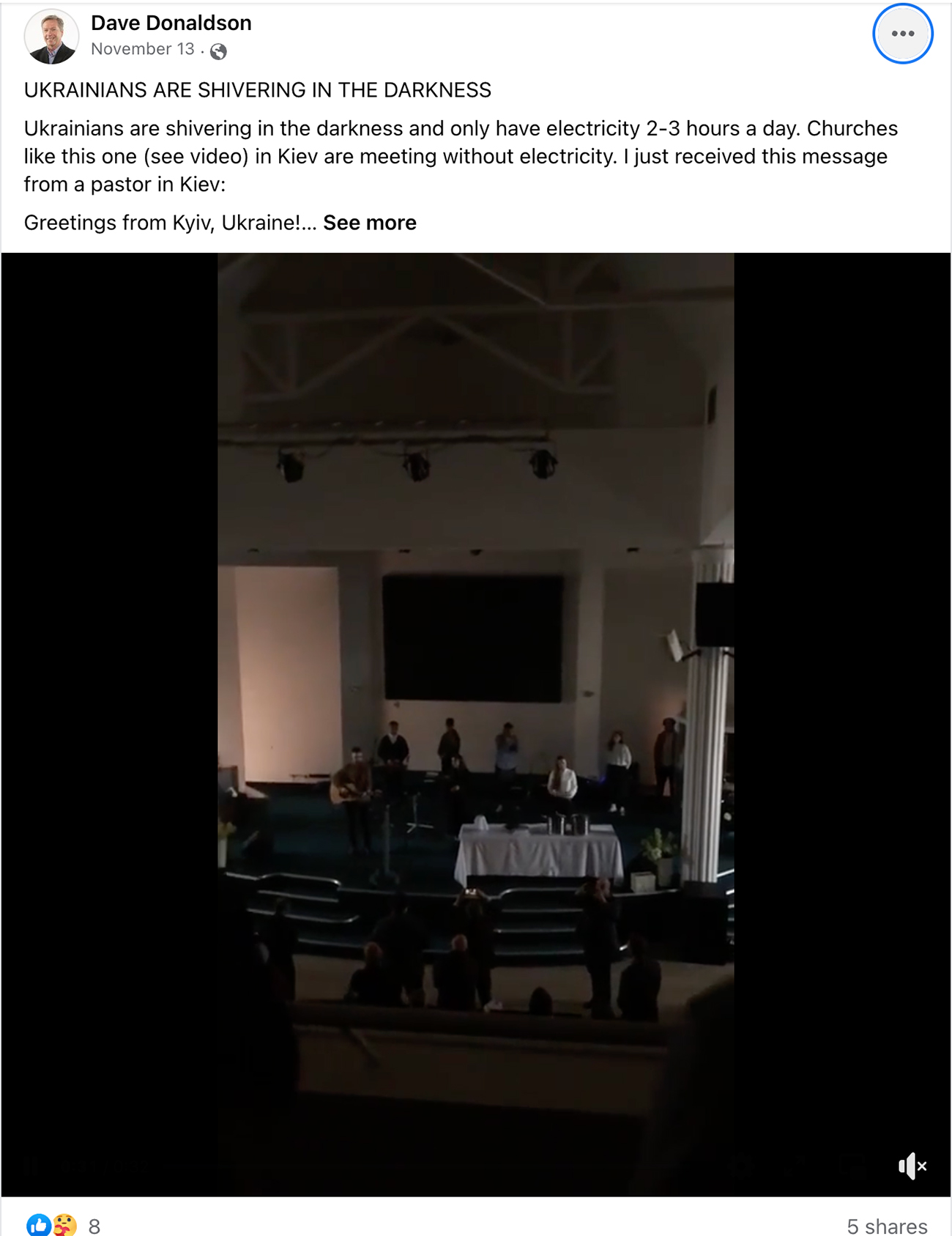 Right now the people of Ukraine are shivering in the dark. And like the allies who helped the Continental Army of Gen. George Washington survive the cold winter of their discontent, we must assure this new era of freedom fighters they do not fight not alone.

When you grab your coat to step outside and brave the cold, remember those in a war zone right now who have to wear their coats inside too. As you consider where to be generous this time of year, I pray these innocent Ukrainian families in the cold are at the forefront of your mind.

Dave Donaldson is co-founder and CEO of the charitable relief organization CityServe based in Bakersfield, California.